In my last article I told you about the Breaking Bad references I’ve unearthed in both The Walking Dead, and this new prequel series, Fear the Walking Dead. I only covered the pilot episode and Episode 4. Here I cover Episodes 2, 3, and 5. More Breaking Bad connections, and a few other goodies!

Episode 2, “So Close, Yet So Far”, has Alicia left at home with a detoxing Nick who falls off the couch and starts vomiting. Alicia rushes to him and turns him on his side so he doesn’t choke to death.

This was a big theme in Breaking Bad, with Walt watching Jesse’s girlfriend die in just this manner. Yes, it’s something that would happen to any addict and isn’t necessarily specifically a Breaking Bad nod, but I’m gonna go with it.

One of my favorite discoveries this season happens when Madison goes after Art, the school principal who has turned walker, with a fire extinguisher.

With the third and fatal blow to his head, you distinctly hear the Achievement Unlocked sound from Xbox. I rewound it a few times just to hear it.  This also happened to Rick with his first headshot in the first episode of the first season of Walking Dead. Awesome.

Always know where the weapons, I mean fire extinguishers, are.

Episode 3, “The Dog”, has a walker stumble into the open back slider of the Clark family home and start showing down on another neighbor’s dog. I choose to believe a dog would have won that fight and gotten away, but that’s me. Haven’t been in a lot of dog or walker fights, so what do I know? Anyway, Nick, Alicia, and Madison have been next door retrieving a shotgun and shells when they see the walker enter their house. Just then, Travis and friends roll up. The Clarks rush to the house to warn them about the walker, who they interrupt mid feast. David, the barber, takes the shotgun from a hesitant Madison, and shoots the walker in the face. What does that make him look like?

A one eyed freak monster, who shows up again and again in Breaking Bad, from the pink teddy bear to Gus.

At the end of this episode, as Nick is skulking around a house looking for a window to break into, a plane flies low and loud overhead.

It looks like the plane is going to crash into the mountain when it makes a sharp turn at the last second. Very reminiscent of the low loud plane flight, and eventual crash, in Breaking Bad. The same crash that sent debris into Walt’s backyard and pool. And what does Episode 4 open with? Nick floating in the pool.

Enjoy while it lasts, pal.

I didn’t find any Breaking Bad references in Episode 5, “Cobalt”, but I did get confirmation of a theme I’ve had a very strong suspicion of since Episode 2. I’m without a doubt right, and I’m very excited to share that discovery with you next!

Catch any Breaking Bad references or other cool stuff in this inaugural season of Fear the Walking Dead? Lemme know in the comments or on Twitter! 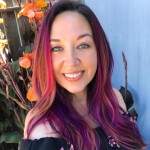 Niki is a comedian whose thumb hurts from all the FF and RW. Share your thoughts and finds with her on Twitter.